Vinyl siding and historic preservation typically do not play well together. It’s an ongoing debate, sometimes cringe-worthy sight as buildings across the country are clad in vinyl. Preservationists know vinyl isn’t the maintenance free answer that people think it is. Yet, we seldom make headway. Perhaps until now.

Introducing a guest series by a new contributor: Philip B. Keyes, a fellow preservationist, with four new approaches to the old discussion on vinyl siding in a four part series. Part One. Part Two.

By Philip B. Keyes

In general, the folks who are shopping in the plastic aisle or already live in Tupperware (again, sorry) frankly don’t care much about the historical value of their homes, at least not yet. And a great time to educate them about the value of our collective historic built environment is not when we’re telling them what they should or should not do. That association, historic preservation and restrictions, is precisely how we preservationists earned our reputation for bossiness. Counterproductive.

Instead, consider their interests in the product, which fall into four general categories: Hint, one of them is not obscuring historic fabric so why argue that point. They are: (a) tired of painting; (b) want a clean and tidy appearance and some curb appeal; (c) want protection from the elements; (d) plastic siding is maintenance free. Now here I invite preservationists to do a little research on these interests because plastic siding is a demonstrated and resounding negative in all four categories, whether it’s already on, or planned. Let’s take them one at a time.

(A) No more painting: Really? A proper paint job will last 10+ years in a building without moisture problems. If the paint is peeling it’s because the building is telling you there’s a problem that needs to be addressed, i.e. free advice. Covering building problems with plastic means they will only get worse, and new problems will remain undetected. With time, rot will permeate the wall structures and worrying about painting will be the property owner’s nostalgic lament. Additionally, there are no money savings from plastic, even if you hire the painting out. The cost of a 20-year plastic siding installation will pay for two professional paint jobs.

(B) How about that clean and tidy appearance? Well maybe until the clear-coat that’s lived inside all its life plays outside for a while. Colored plastic fades in the sun, period, and a few years after you install it, plastic siding looks faded, cheap, and dirty – no different from the plastic chairs that need freshening (throwing out) every few years. As for clean and tidy, take a look at plastic siding repairs where newly purchased shiny strips mingle with the older stuff, if the manufacturer still makes that color. Ouch.

Siding in need of replacement, as it cannot be repaired.

(C) And is plastic good protection from the elements? You bet, but if you’re going to suggest that water can’t find its way behind the siding, I have a 100-year-old shiny house to sell you. Water will find its way behind the siding if you have any wind at all, and it will condense with all the moisture laden air that used to escape harmlessly through your walls, congregating in that newly created cavity where you can’t see it. Plastic is good at keeping moisture in, too! Take a drive through some neighborhoods where the siding salesman visited 15 years prior; you can literally see some of the buildings sagging from deliberately obscured, or undetected structural problems made worse by the plastic covering. 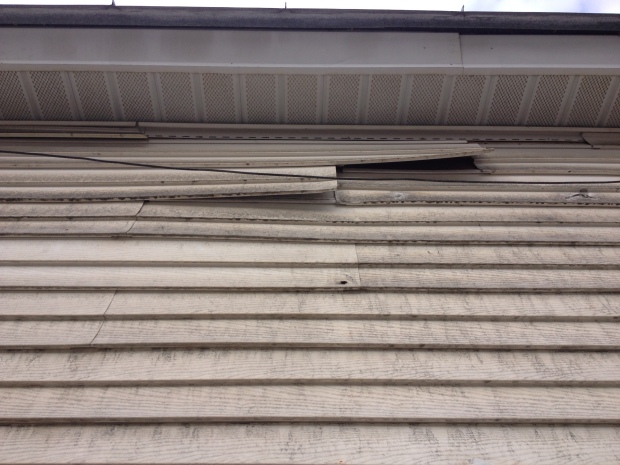 Vinyl siding about to blow off, it appears.

(D) Finally, the appeal of “Maintenance Free”. So no replacing the deteriorated caulking at the joints? No replacing cracked, dented, or blown-off siding (actually, Wolverine siding now comes with a “won’t blow off” warrantee – awesome). What about addressing that depressing, faded appearance owners will come to know and not love? It’s true that plastic siding is maintenance free, because you can’t maintain it. Bottom line, addressing the real interests of those with or considering plastic siding is where the interaction should be, and where the fight will be won.

7 thoughts on “The New Discussion on Vinyl Siding: Part Three”