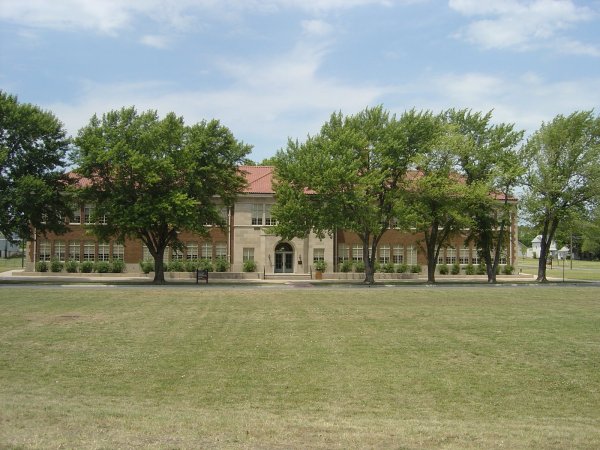 The Monroe Elementary School, constructed 1926, is the home of the Brown v. Board of Education National Historic Site in Topeka, Kansas. Photo taken June 2006.

From the National Park Service:

The U.S. Supreme Court decision in Brown v. Board of Education (1954) is one of the most pivotal opinions ever rendered by that body. This landmark decision highlights the U.S. Supreme Court’s role in affecting changes in national and social policy. Often when people think of the case, they remember a little girl whose parents sued so that she could attend an all-white school in her neighborhood. In reality, the story of Brown v. Board of Education is far more complex.

In December, 1952, the U.S. Supreme Court had on its docket cases from Kansas, Delaware, the District of Columbia, South Carolina, and Virginia, all of which challenged the constitutionality of racial segregation in public schools. The U.S. Supreme Court had consolidated these five cases under one name, Oliver Brown et al. v. the Board of Education of Topeka. One of the justices later explained that the U.S. Supreme Court felt it was better to have representative cases from different parts of the country. They decided to put Brown first “so that the whole question would not smack of being a purely Southern one.”

Learn more about the school and its relation to Civil Rights here. Read the building history from the HABS documentation here.