One room schoolhouses are easily recognizable, as we’ve discussed. I delight in what I call my “schoolhouse radar”. It’s a fun game to play. What is your favorite type of building to spot? 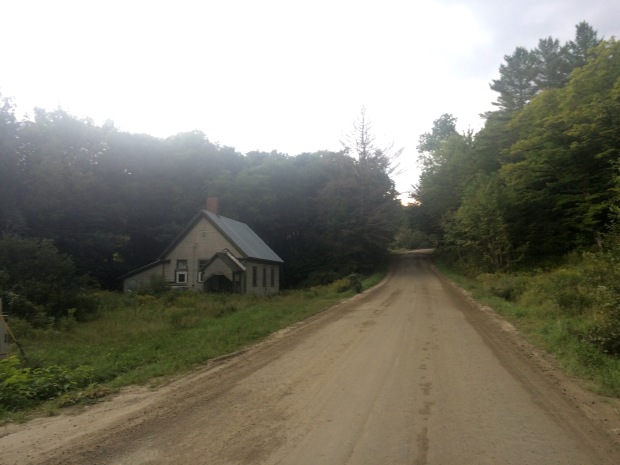 At the crossroads in Garfield (a small hamlet in Hyde Park), VT on a cloudy, foggy day – just before a summer storm arrived.

Near Green River Reservoir in Hyde Park, VT, this building sits at a crossroads, a common place for one room schoolhouses. It has the gable roof massing of a schoolhouse and the general size, and hint of Green Revival detail (cornice returns).

While the building looks a bit dreary in the fog and clouds and the overgrown weeds, it still stands out as a schoolhouse converted to a residence, right? Maybe? Where is the bank of windows? 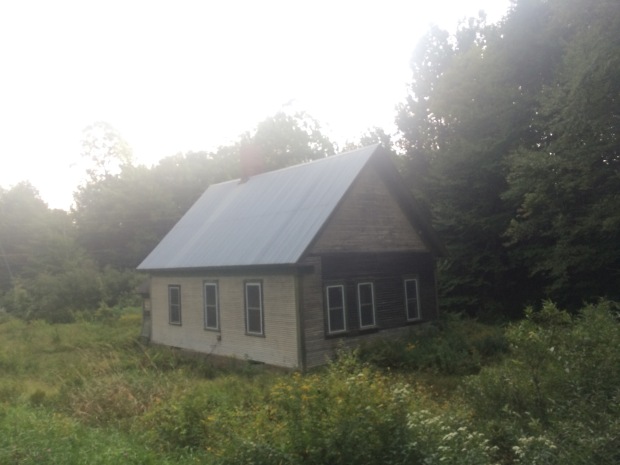 Pardon the fog and the clouds.

The windows don’t lend themselves to a schoolhouse, but look closely and you can tell by the paint on the rear of the schoolhouse that the bank of windows has been removed and replaced by residential windows. Still, I’d bet on it being a schoolhouse.

Next up? Consulting the trusty Online Resource Center (ORC) of the Vermont Division for Historic Preservation. The ORC contains searchable PDFs of all of the state survey files, among many other resources.

Garfield District School, 1981. The best part: the duck and ducklings to the right of the school. Source: Vermont State Register of Historic Places file.

This building at the crossroads of Garfield was indeed a schoolhouse. According to the 1981 survey, this was the Garfield District School, constructed in 1875, operating until 1953. This was one of the first schools in Vermont certified as a “Standard School”. The Standard Schools were aptly named, as schools were rated based on standards of lighting, ventilation, teaching quality, sanitation, and other details. As of the 1981 survey, the building was a residence. The survey does not discuss the west elevation (the former window bank). However, the existing chimney replaced a cupola that enclosed the school bell.