A quick jaunt out of White River Junction, Vermont brings you to West Lebabnon, New Hampshire on the east side of the Connecticut River. This is the site of the abandoned Westboro Rail Yard, which is designated a brownfield and awaiting redevelopment and migitation. Though adjacent to a large asphalt paved area of land, the buildings themsevles are fenced off and hidden by overgrown trees and brush.

“The site served as a rail yard from 1847 until the 1970s. It was then vacant until the state of New Hampshire purchased the 19.1-acre property from Boston and Maine Railroad Company and “restored rail service in 2000 under an operating agreement with Claremont Concord Rail Company.”2 The northern acre, the parcel being considered for cleanup and revitalization, was first developed during the mid 1930s and early 1940s to be used as a bulk oil storage facility for Tidewater Oil Company, who leased the land from Boston and Maine Railroad Company. Concrete above ground storage tanks (ASTs), which were removed from the site in the 1970s, contained an unknown amount of an unknown oil type. Tidewater Oil Company shut down in the 1960s. Over the next 25 years, the New Hampshire Department of Transportation (NHDOT) removed all remaining concrete ASTs and off-site buildings before using it as a temporary roadwork equipment storage area.”

View towards the roundhouse.

The roundhouse showing the fence and many alterations. 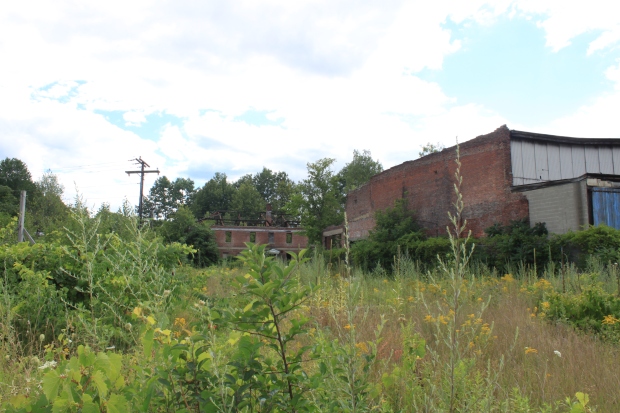 Beyond the roundhouse is a building shell; look closely and you can see the exposed roof framing.

Industrial areas – the gritty, blue collar society places of work – are becoming more in vogue for redevelopment. Maybe this site has a bright future. Check out some site proposals here.