Everything is green in Ohio. The hydrangea and the dandelions have sprung. The buds of Sugar Maples have turned to drooping tassels of flowers and finally to green leaves. The seeds have been sown and little chard leaves have peaked from the soil. The onion is taking root. The birds are happy.

I have to admit that I’ve been a little distracted from school lately. There’s been a severe case of burn out in the program at Belmont Tech among many of the students. Winter’s “state of emergency” snow load and intensive winter projects took their toll. It seems many of us are still trying to recuperate.

Field Documentation has us at an 1870 one room school-house where another classmate and I are documenting the landscape. Our work will culminate in a sort of Cultural Landscape Report within a broader HSR.

In Plaster I’ve been doing an augmented reproduction of the Drayton Hall ceiling medallion. The process includes modeling from clay, molding the clay pieces, casting with plaster, and creating tin profile jigs for the running. The wall plaster and scagliola components to the class are to follow.

Perhaps my favorite class this quarter has been the Field Lab. We’re required to take four quarters of Field Lab where we work at an actual site applying our lab work experience under the guidance of either Dave Mertz (director of the program) or John Smith (superintendent to Allegheny Restoration).

The Spring quarter has us at the 1840s Swaney House in Morristown every Friday. We’ve begun with several projects: stone lintel crack repair, hanging of exterior window shutters, wall plaster, gutter hanging/soldering, and finish carpentry for the porch. John knows quite a bit about the preservation trades. His first trade is carpentry, but he seems to know just about everything. Working beside him feels much like working as an apprentice at times. You feel he’s giving you invaluable information, trade secrets, time-tested techniques. For example, using a coping saw to cut your inside mitre joint to allow for imperfect corner flexibility. Or that the “scratch coat” for wall plaster need not have any scratches. Or that the joint on metal downspouts should always create a 90 degree angle to a brick wall to avoid the brick being damaged when the metal expands in changing temperature. 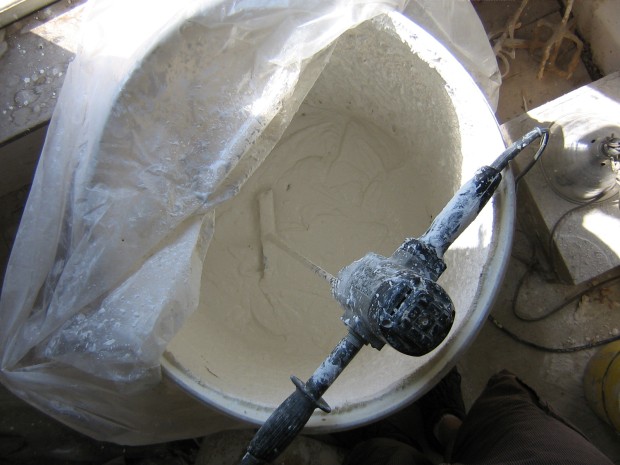 Lime putty. Historically left to hydrate for many years. Photo by Nicholas Bogosian.

We’ve been able to see quite a bit of historic “apprentice work” throughout the house – brick walls laid in a bond one can only define as “apprentice bond.” This past Friday it felt like I was only adding to the collection of apprentice work with imprecise wood measurements while cutting some wood molding. My friend Abby, who was helping me, mentioned the old “measure twice, cut once” adage to which John replied that we actually just need to measure once. Correctly. He also informed us that the old “practice makes perfect” adage is a fallacy as well. Practicing the wrong way doesn’t make anything perfect, after all.

John perpetually keeps us laughing throughout the day. Always an anecdote for every step in the process. Always a story from preservation-assignments-past. This is the one day of the week we get to relax a little. Though we have to keep a log of what we’re doing and document the process, there’s usually no strict time frame for what we‘re doing. No note-taking. No textbook. No tests.

And believe me: I’m fine with that.

Abby and I taking pictures while the others are working. Photo courtesy of Nicholas Bogosian.