Preservacation is a series of essays by Brad Hatch about the preservation related adventures, issues, and sites that he and Lauren have encountered on their travels.  This is #6 in the series.

What more can I say about gravestones that hasn’t already been said? If you’ve read In Small Things Forgotten (as most of us Mary Wash alumni have) you already know about the seriation of headstones going from death’s heads to cherubs to urns and willows and how that reflects a society’s feelings about death. Rather than trying to understand what long-dead people thought about the headstones in their graveyards I’ll talk about what I know, what I think about them. I don’t want to make this post long, as several of my previous ones have been, so I’ll quickly give you my thoughts then let you come up with your own by showing you some images of the gravestones I’ve encountered in my travels in North Carolina.

I should start by saying that I have a strange fascination with graveyards. I think it must stem from an obsession with things that are not knowable. After all, what is less knowable to us, the living, than death? I know, it’s weird, but if you think about it, as an archaeologist it’s no surprise that I’m taken by these ideas. I deal with the unknowable on a daily basis. I can never know what happened in the past or what things meant to people then, how they felt, what they thought. I only see little glimpses of them in what they’ve left behind and I have to use their little trinkets to come up with interpretations about humanity. While many may think that archaeologists speak about the past in their interpretation it is truly the present that we address. Everything we do is driven by what is happening at this moment in our lives, in society, and in the world. Archaeology, like so many other creative pursuits, is partially a quest to find one’s self, and in my case I use the medium of material culture.

Gravestones are like archaeological artifacts on historic sites. Often they are mass produced, or at least made for mass consumption, which is why they can be seriated. Like artifacts, they carry heavy symbolic meaning, which can be seen in the artwork on them, their shape, or epitaphs. More easily recognized among headstones though is the fact that they are for the living, not the deceased. While some may have chosen their markers, most were likely commissioned after they died. This means that tombstones are often devoid of meaning to the person they commemorate. In actuality, they reflect what others thought of them or what others thought that the deceased held dear or believed.  However, there is always the possibility that the stones represented what the living believed, which is likely the case. This means that the people who placed the stones acted as archaeologists for the deceased. They attempted to know the unknowable, the thoughts of somebody who could no longer tell them. Burying grounds fascinate me because of this.

When I make my way through a cemetery I am effectively doing the archaeology of archaeology. I am interpreting interpretations. It seems quite ridiculous, but I know that one day somebody will be doing the same with my work. In a way I find my “connection with the universe” when I do this. It helps me to realize that even what I do, while it may seem insignificant in the grander scheme, will make an impact on somebody in some way. If I am able to make just one person think about who they are then my job is accomplished.  Now, it’s your turn to think. As you look at the selection of headstones below think about what they mean or what they might have meant. Before you turn away, though, think about why you made the interpretations that you made, what does it say about you? What does it say about the world you live in? It makes no sense to try to understand the past or other societies until we have an idea of the present and our places in it. Enjoy your moments of reflexivity.

Unique Female Portrait (Possibly One of a Kind) in Bath, NC. Courtesy of Brad Hatch. 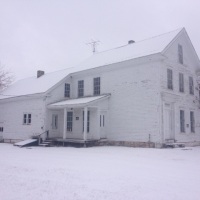